I have become a huge fan of generative art in recent months. What I really enjoy about it is the tension between code as a very stringent structure and sequence of mathematically precise instructions, and the creativity that lies in the arrangement of these instructions to let the code produce pieces of art.

This blog post is about “Generated Spectrum”, my first generative art project consisting of a simple Python program which generates an image of 600 squares arranged in a 20x30 matrix. With a certain degree of randomness, each square gets a color assigned, following a color gradient inspired by Ellsworth Kelly’s “Spectrum”.

The code is very simple, you can find two versions of it on my Github page. The one named ”generated-spectrum.py” is the original version, the one named “generated-spectrum-for-beginners.py” is specifically for people who have never worked with code before. There, I have explained quite thoroughly what each line of code does. So, if you are a beginner and would like to generate your own images with my script: Download the file, have a look at the code to understand what it does and how you can manipulate it, and have fun generating images! If you have never executed a Python program before, you might want to check out this tutorial.

After generating a few pictures with this script, I chose the one I liked best:

I then used this generated image as a template for an acrylic painting on a canvas measuring 150x100 cm. In order to get sharp white lines, the entire canvas was painted in white, then masking tape was added to get the squares, and then it was painted white once again. The next step was to paint all the squares according to the generated image. I had never used masking tape with acrylic paint before, so I was quite nervous before pulling the tape off. But it worked really well and seeing the sharp lines was very satisfying! 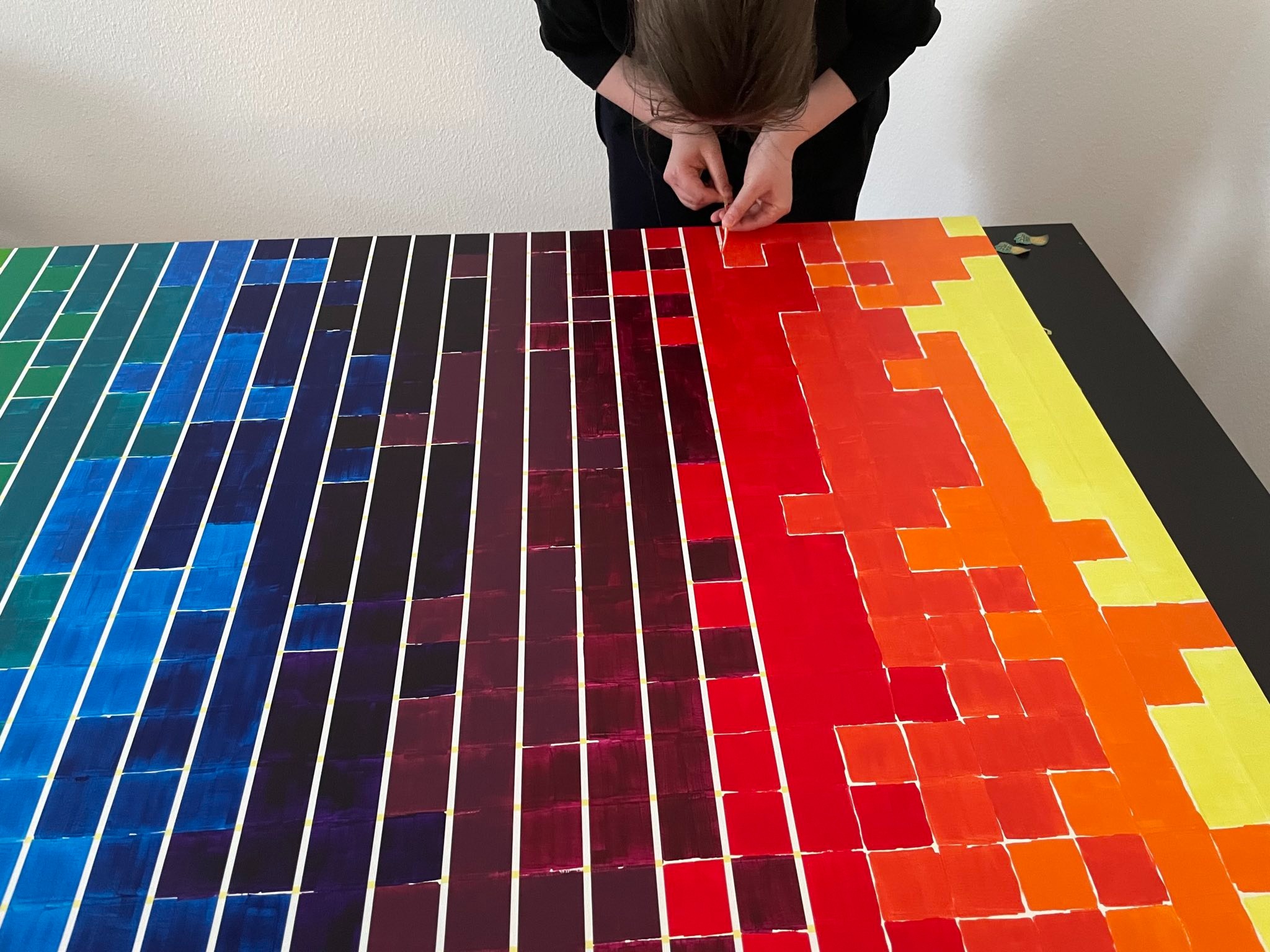 I really enjoyed the process of creating this generative piece of art, particularly because the art work has not only materialized as a file saved on my computer, but taken form as an actual painting which now decorates my living room. Can’t wait to get started with my next project! 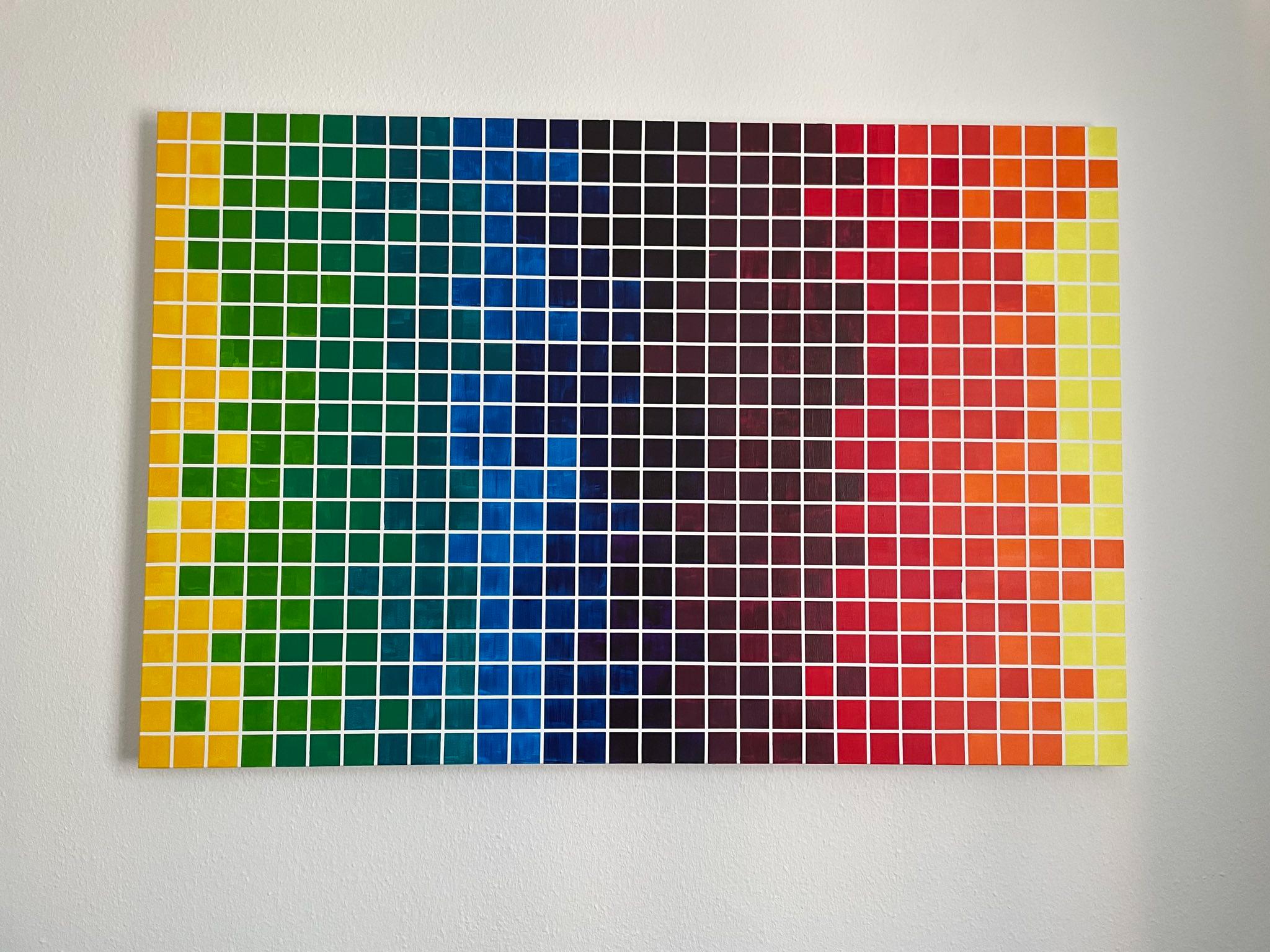 Lecture at the Children's University

Last weekend I was invited as a speaker at the children’s university organized by the Familienakademie of the Kathinka-Platzhoff-Stiftung. The topic was “Wie funktionieren eigentlich Roboter?” [How do robots actually work?] and children between 8 and 12 came to participate. I was quite nervous whether the children would like what I had prepared - but it went really well!

First, I held a 40-minute lecture about robots, thematizing aspects of the robots’ hardware, their software and the ways robots are already used nowadays. One of my main points was that robots are not magical or living beings, but objects that are built out of specific technical components and need to be programmed by people in order to function. Also, I thematized that the way robots are portrayed in fiction is not equivalent with how they are being used nowadays, or how we will live with them in the future. Rather, it is important to understand the basics of robotics for a productive debate on how we want to shape our future with these objects.

After the lecture, the children were split in three groups and completed three different activities for 30 minutes each. As a first activity, I showed them the functioning of a soccer robot that I borrowed from the team I conduct research with. The children had many questions and particularly liked its motion to stand up automatically after falling down. If you are interested in soccer robots, check out the website of the RoboCup, or the youtube channel of the Standard Platform League to see Nao robots play!

The second activity was to design a robot and build a “prototype” out of cardboard. The children first had to decide what their robot should be able to do, and then what components it would need to move, and to perceive and to interact with its environment in order to complete their task. The children got super creative and built very fancy and potentially very useful robots!

And the third activity was to gain first programming experience with the game “Code with Anna and Elsa”. Programming is quite challenging, particularly if you do it for the first time – which is all the more a reason to start when you are young!

When reading media articles about artificial intelligence, one easily gets the impression that AI is somewhat independent of humans. The successes of AI are hailed, including its dominance over humans in games like chess or Go, or its power to analyze data faster, cheaper and more accurate than humans. I have the impression that in many articles and discussions about AI, notions of the future are readable between the lines – either dystopian or utopian, and yet of an entity which is on the brink of outpacing humans.

What is often not present in this discussion is the fact that AI does not develop magically all on its own, but like any other software product, is written by people. These people are mostly not addressed in the general discussion about AI. Their work and their perspective on the technology often remains invisible. I argue that this is damaging to a productive discussion on AI because it inhibits us from recognizing ways in which to influence our future with this technology.

If you are interested in this topic, come and join my panel “Addressing the Humans behind AI and Robotics” at the RAI conference “Anthropology, AI and the Future of Human Society” in June 2022. The CfP is still open until February 25, so if you work on this topic, I’d be happy to receive your abstract! Please find more information here.